The Chonos Route explores the Northern Ice Field, which is located in the Southern Patagonia. Its area is 4400 km2, 100 kms long from north to south and it is 40 kms wide from east to west, its ice cover approximately 70 glaciers. This mass of ice is the place where the closest glacier to the Equator that descends to the sea, the San Rafael Glacier which covers 15 km, between Monte San Valentín to the homonymus lagoon. 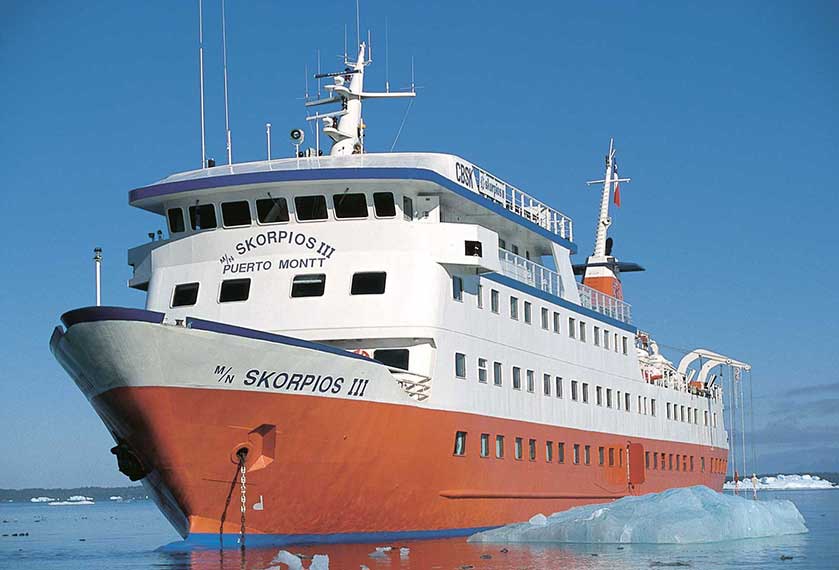 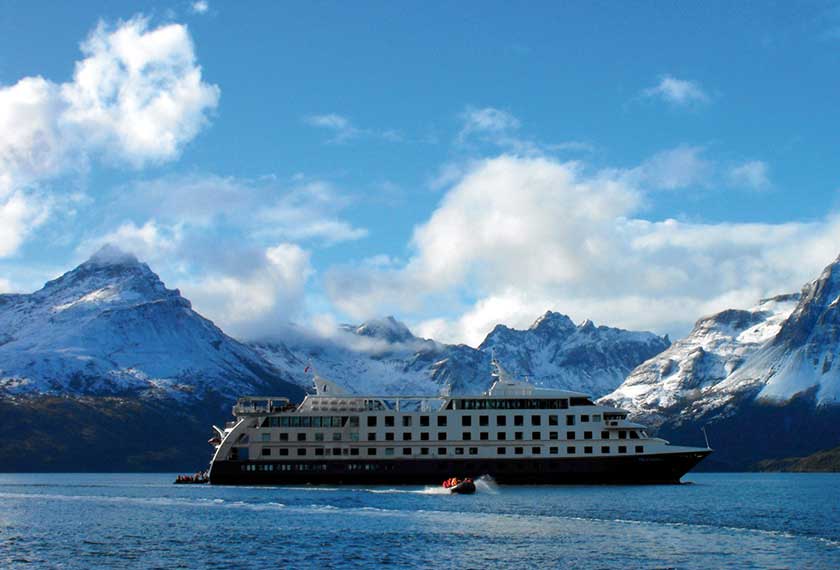 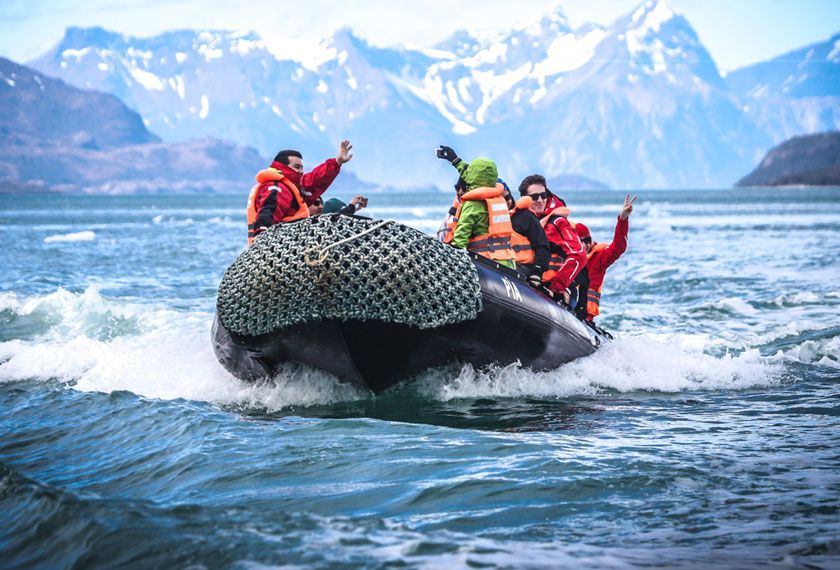 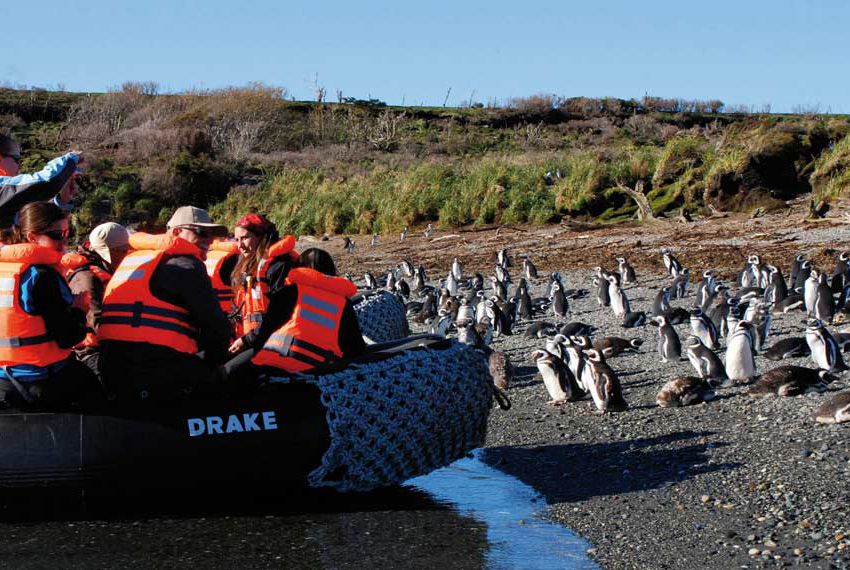 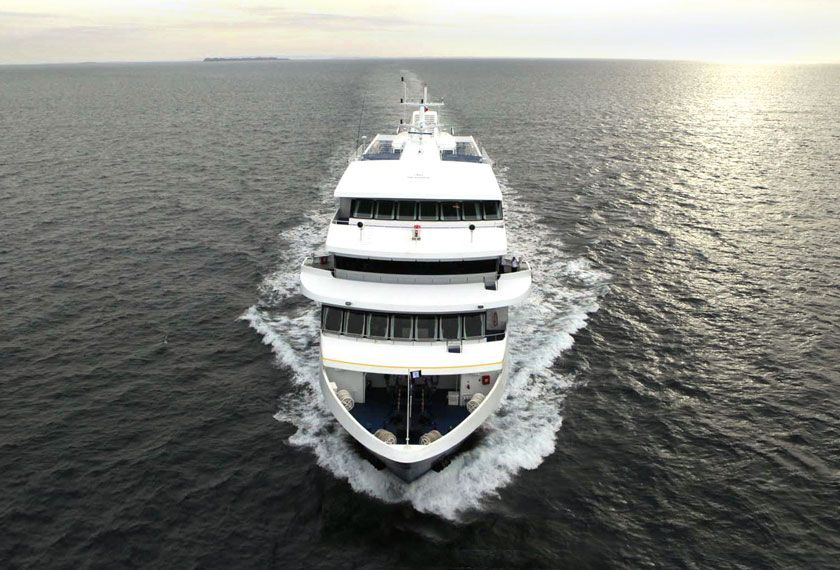 was built in 1988 by the very same shipyards of the Kochifas family. The ship is 70 metres long and 10 metres beam, and almost 3 metres of draught. Its cabins are decorated with wood which are distribuited in 5 decks, all of them with private bathroom, TV LCD and background music. Accommodations can be marital or twin cabin. The ship offers two stylish bar rooms, one of them is the main dinning-room or Quitralco room allowed for smokers and the other one is the San Rafael Bar allowed for non smokers.

The M/N Skorpios II can accommodate 130 passengers, il sets sail every Saturday and returns on Tuesdays, and it has exits from september to may. It sets sail from the port station of Skorpios in Puerto Montt, the most important city in the Lakes District, which dates from 1853 and it is located in front of the Seno of Reloncaví.

During the crossing, the crew will give all their experience and you will be able to enjoy an excelent level in their gastronomy for discerning people, thanks to the chef who will make you taste delicious regional dishes which are elaborated with shellfish and regional meats, respecting the culinary tradition of the Patagonia, where spider crab, mussel, oyster, salmon, corvina, sea bass and conger eel, and also curanto a traditional dish in the millenial gastronomy of Chiloé, which will be allways go with the excellent company of chilean fine wines, which are considered like one of the best in the world.

Day 1 - From the Llanquihue Archipelago, Calbuco city, Gulf of Ancud to Gulf of Corcovado

The M/N Skorpios II ferry sets sail from the chilean city of Puerto Montt, in the Lakes District so we can start the Chonos Route´s navigation (San Rafael Glacier). Puerto Montt is the capital of Llanquihue province and the X Lakes´ Region. We will leave the Archipelago of Llanquihue which is famous because of its lake that is the most important tourist centre in the area. We will be able to sight the old city of Calbuco, which dates from 1603, it belongs to the same region. Later, the navigation route will go to the Gulf of Ancud that divides the Chiloé Island and the Archipelago of the Greater Island of Chiloé from the continent, leaving the Gulf of Corcovado aside.

Today we will sail along the Moraleda and Ferronave Channels. The Moraleda Channel not only divides the Archipelago of Chonos from the Magdalena Island, but also from all the chilean continent. After some hours of navigation, we will arrive at Puerto Aguirre, a picturesque village of fishermen, so we can visit the Ferronave, Pilcomayo and Costa channels, after midday. During the afternoon, we will anchor in Caleta Hualas or Punta Leopardos, very close to San Rafael´s Glacier. This glacier is the biggest between the other glaciers in the Northern Ice Fields, it keeps active the homonymous lagoon and thanks to that, it empties in the Moraleda channel

Very early in the morning, we will cross the San Rafael waters and the Témpanos Channel. During the morning, the ferry will come into the lagoon to anchor at only 2 kilometres far from the San Rafael Glacier. Before midday, we will embark on boats to enjoy and watch the ice floes which give life to this amazing landscape, as long as the weather conditions will allow us to. In the afternoon, we will get closer even more to the glacier and finally we will go to Quitralco Fjord.

On our fourth day route, the Quitralco Fjord will be waiting for us, which we will enjoy very close so we can know it while we are navigating on rubber boats. After breakfast, we will be able to take advantage of hot baths with an average temperature close to 32ºC. In the afternoon, we will go to Chiloé Island to explore the Moraleda and Pérez Norte channels. The Moraleda Channel gets wider in its two branches, Costa and Estero Elefantes.

We will cross the Gulf of Corcovado, so we can have the possibility to watch blue whales or alfaguara. We will continue our route navigation going round the west coast of Chiloé to Yal Channel so we can disembark in the seaside coast of Estero de Castro to go visit it. At night we will go back to the ship so we can embark in Puerto Montt along the Lemy, Dalcahue and Quicaví channels while we get ready for the dinner and the farewell party in which there will be a ball.

We will dock very early in the Skorpios Terminal in the port of Angelmó. Once we got our breakfast, we will disembark saying goodbye to this adventure along the Northern Ice Fields. 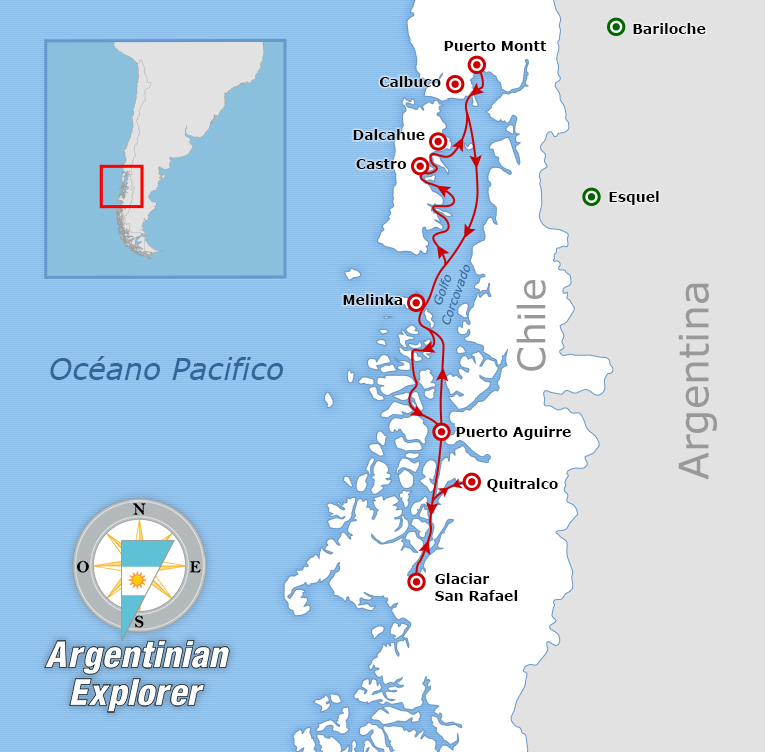 Specifications and technical data of the M / N Skorpios II

The M/N Skorpios II has capacity for 130 passengers, has cabins fully equipped and decorated, all with private bathroom, piped music, Intercoms and television. It also has the Quitralco (smoking) room, bar San Rafael (non smoking) and a main dining room. On board the m/v Skorpios II, you will find an attention personalized and kind, always with exceptional service in charge of the Kochifas family and experienced and well-trained crew, who will offer warmth and efficiency in a unique and unforgettable cruise.

You can enjoy a refined cuisine, which alternates with tasteful, international cuisine with the best culinary traditions of the South of Chile, which include: King crab, giant Mussels (Mitilus), mussels, mussels, oysters, sea urchins, picorocos, salmon, croakers, snooks, Conger, red, white meat and succulent and delicious Curanto, always accompanied by the best Chilean wines and exclusive drinks and beverages in the traditional open Bar of Skorpios.

No port tax must be paid during navigation, only the boarding fee is paid, which is approximately US $ 10.

On board the ship there is satellite telephony, you can speak anywhere in the world, according to the rate corresponding to each destination.

It is recommended to wear clothing necessary for excursions, such as trekking shoes, parka or waterproof jacket, hat, scarf, sunglasses, sunscreen. The swimsuit is advisable to wear it for those who do the crossing in the M / N Skorpios II. Comfortable shoes should also be worn for use on the boat and thick shoes (borceguíes) for exits or for the deck of the boat. You can wear formal clothes for the gala night. The boat does not offer the haircut service to the crew, if there is a light laundry service (laundry).