Fly over Cape Horn and the turbulent waters of the Drake Passage in an awesome experience to the coldest and most inhospitable continent in the world: Antarctica. From Punta Arenas to King George Island (the largest island of the archipelago of the South Shetland ) in little less than 2 hours to start browsing for 6 days in the Antarctic Peninsula. We return to the continent by plane, from King George Island to the city of Punta Arenas.

Aero-cruise to the Antarctic Polar Circle in a 9 day trip 8 nights traveling by plane to Antarctica and returning in the same way, from Punta Arenas (Chile) ret...

An unusual trip to Antarctica that combines a classic navigation with a first stage flying to Southern Patagonia, observing Cape Horn and flying over the turbulent waters of the Drake Passage. We leave the city of Punta Arenas eastward to the archipelago of the South Shetland Islands; more precisely we will land in its largest island, King George Island on a flight that lasts a little less than 2 hours. We will board to start the route to the South Pole, sailing for 6 days discovering the Antarctic Peninsula. Antarctica is the windiest, coldest, dry and desolate continent on earth. We managed to fulfill the dream of many people, see the Antarctic continent where is the 90% of the ice of the planet, the maximum reserve of water. The Antarctic marine fauna is diverse, we see the southern right whale, sea elephants Weddell seals, Adelie, Chinstrap Papua, along with birds such as albatross, petrels and Antarctic pigeon. Then we return by plane from King George Island to Punta Arenas.

During these days we will sail the route that separates the Shetland Islands of the Antarctic Peninsula, leaving on the way some beautiful fjords and icebergs that impact for its size, with the pleasant company of a rich marine wildlife, from birds to penguins, seals and whales. Every day, we disembark in Zodiac boats and explore the landscape together with expert polar guides. On board the ship, attend an attractive program of conferences and presentations, and enjoy the spectacular views from the lounge while sharing your daily adventures with other guests.

No trip is the same as another because flexibility is the key to success in Antarctica. The Expedition Team establishes the route of the trip to take advantage of the ever-changing opportunities that nature offers, creating a unique and extraordinary experience each time. While the itinerary changes with each expedition, you will explore several places that offer the best possible overview of the varied Antarctic environment. Your trip may include visits to sites such as Paulet Island, Hope Bay, Livingston Island, Port Lockroy, Peterman Island, Paradise Bay, Deception Island, the Lemaire Channel or many other magnificent places.

It all depends on each trip and climatic conditions during navigation. The main goal is to cross the Lemaire Channel, observing one of the most interesting natural phenomena of the trip, the Columns of the Lemaire Channel, called the Cemetery of Glaciers due to the action of the channel on the thaw. Pieces of ice remaining on the canal are destroyed by water currents, this occurs because the thermal difference between the surface water and the deep waters, accelerating the melting process. During these days we will make several landings in Zodiacs, we will learn about life in Antarctica thanks to lectures given by experts in the field.

On the last day we start the return to King Island, also called Isla 25 de Mayo (the Russians call it Waterloo Island). It is the largest of the archipelago, separated from the Nelson Island by the Strait Fildes. From the Frei Base with a Chilean flag, we will board the flight to Punta Arenas. As in the Express program, the 7th night is included, also needs to be notified in advance for booking. Dinner is not included.

Breakfast at the hotel. Transfer to Punta Arenas Airport. End of services. 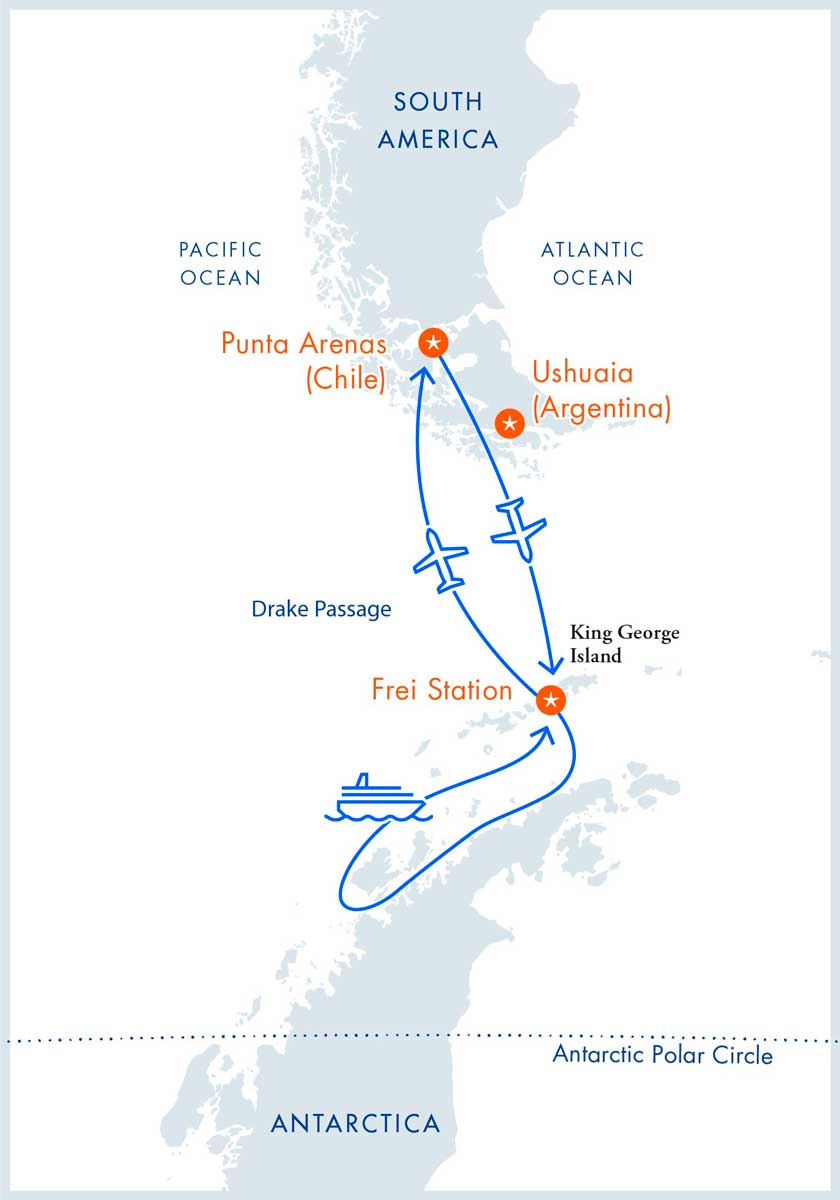