This cruise goes to the Sub-Antarctic Islands and the white continent but starting from Puerto Madryn, near the Peninsula of Valdés, breeding zone of the Southern Right Whale. The itinerary is very similar to the one that sails from the port of Ushuaia. The difference is in the first nights that we go to the first sub-Antarctic island, the Falkland Islands. Then we expect the South Georgia Island and the South Orkney Island, then cross the Weddell Sea to discover the Antarctic Peninsula reaching as far south as possible, an advantage that gives us a program of more than 20 days of navigation. 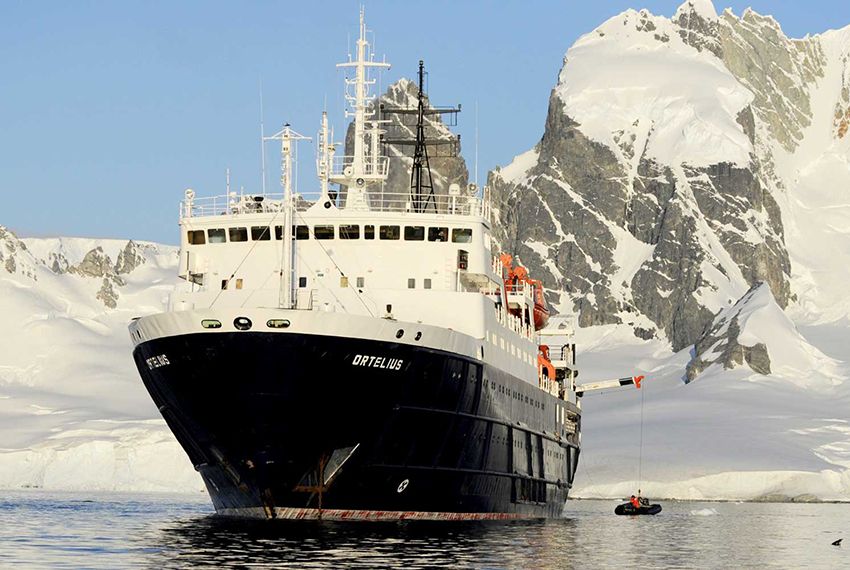 Ortelius was originally the Marina Svetaeva. Built in Gdynia, Poland in 1989, it served as a special-purpose vessel for the Russian Academy of Science.... 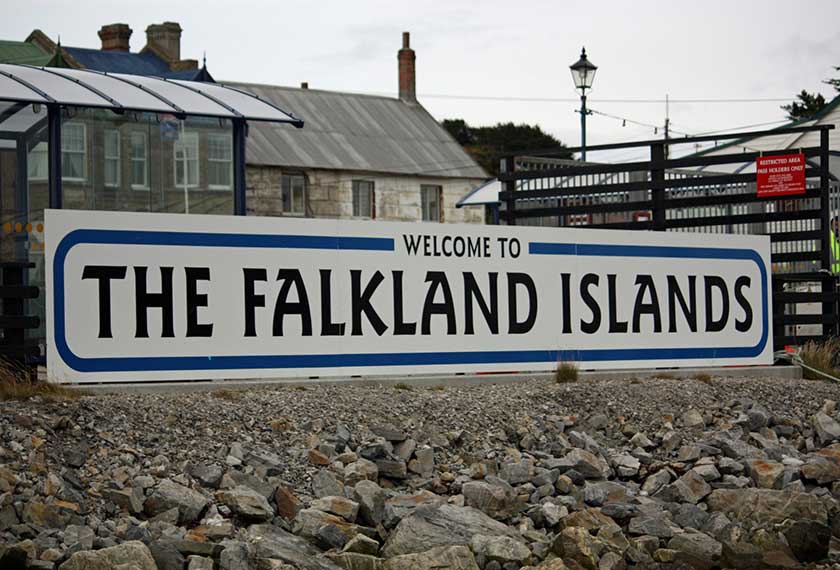 The 21-day departure is the longest and sails from Puerto Madryn, unlike the rest of the departures. The second and third day we are sailing in the sea towards the Falkland Islands. The fourth and fifth day is dedicated to visiting the first sub-Antarctic islands. The sixth and seventh day are destined to cross the Antarctic Convergence. On the eighth day we visited the second sub-Antarctic island: The South Georgia Islands, where we stayed for 4 days. On the 12th again at sea towards the Orkney Islands of the South, which we dedicate on the 13th. Then we move on to the Antarctic Peninsula that we stay for several days from 15 to 18. Finally we begin the return during the 19th and 20th to arrive to Ushuaia on the 21st.

We embark in the afternoon in Puerto Madryn to begin the navigation route that takes us to the Falkland Islands. The New Gulf and the Valdés Peninsula are known for the sighting of Southern Right Whale. In the month of November they begin to emigrate to Antarctica, if we have luckily we can see some in the open sea.

Day 2 to 3 - Sailing along with albatrosses and petrels.

In the sea, in the west side, several species of albatrosses and petrels, such as the Diving Petrel, will follow the ship. We go south towards the Falkland Islands.

We disembarked in the western region of the Falkland Islands. If the weather is mild we go to Steeple Jason Island, called the Wild West Island. We can observe the densest black eyebrow albatross colony on the planet, as they reach more than 100,000 population albatrosses. Another option is to make a trekking along the coast of the Remolinos Island (Carcass Island), being able to spot papua and magallanes penguins, and shorebirds. On Trinidad Island (Saunders Island) it is very likely to see the magnificent black-browed albatross, imperial cormorants and yellow plume penguins that are looking for this place for reproduction. There is a high possibility of observing king penguins on the island.

Day 5 - The capital of the Falkland Islands

We walk through the capital of Malvinas: Port Stanley, being able to have contact with the malvinense culture, mixture of victorian styles and south american influence; Colorful houses, perfectly maintained gardens, and bars with the classic english style. In the capital you can see ships stranded with more than a century, they are the true reflection of the adversities that were in the nineteenth century. You can visit a museum that shows the initial settlements until the war 1982. With a population close to 2,500 inhabitants, it is a quiet city that you can walk freely. Tickets to the different attractions are not included.

Afternoon we disembarked on South Georgia Island. To start with our planned activities we depend on the weather. The places that we can visit can be the Prion Island, since between November 20 and January 7 it is closed to tourists because it is the breeding season of wandering albatrosses. We will also visit the Salisbury plain, St. Andrews Bay and the Gold Harbor, habitat of the largest king penguin colonies in the South Georgia. But on these beaches we find not only the king penguin, but also the largest reserve of the southern elephant seal. This is the reproductive season of these species, being at the peak of their reproduction cycle. It is normal to see the show of alpha males with an approximate weight of 4,000 kg that protect their harem, with areas of females that ended their mating or on the verge of calving. These beaches are supersaturated with elephant seals.

In Fortuna Bay we see penguins and seals on their beaches. Always depending on the weather we can follow the route that Ernest Shackleton made to get to Stromness to survive and save his crew, arriving at the whaling station. In Gryitviken we are going to visit a currently abandoned whaling station where today the King penguins have appropriated the place, as well as the elephant seals. We visited the Museum of the History of indiscriminate whaling and the tomb of Ernest Shackleton, next to the museum.

Our next objective will be visiting the Orcadas station, an Argentinian base located in the South Orcadas Islands. The base personal is very welcoming and they will show us the facilities, very close to them, there is a huge colony south petrels and we can enjoy the wonderful views of the glaciers which surround us. When we arrive to the Orcadas, we will anchor in Laurie Island. We can go to Cormoran Point to watch an important colony of Adelia penguins. If the landing on Laurie Island was impossible due to weather conditions, we can go as far as Signy Cove to descend on Signy Island.

The ship moves through the Weddell Sea through ice blocks that drift across the Antarctic Strait. The spectacular tabular icebergs indicate the gateway to the eastern sector of the Antarctic Peninsula. The place chosen to step on Antarctic soil is Brown Bluff, a dark rock formation that serves as a refuge for a large colony of Adélie penguins. If the good weather accompanies the navigation, we will continue walking through the waters of the Weddell. The idea is to visit Charlotte Bay, located on the west coast of the land of Grahan, which was discovered by the Belgian explorer Adrien de Gerlache during his expedition between 1897 and 1899. The name corresponds to the one promised to the second in command of the crew, the hydrographer Georges Lecointe. This picturesque bay is surrounded by mountains, with nunataks that emerge from the icy surface. Among the icebergs that usually abound on the coast, you can see several groups of seals, cook gulls, skuas, cormorants and penguins. Another corner to know is Wilhelmina Bay on the Arctowski peninsula, where we can admire the rugged mountains covered with ice.

In Deception Island, we will try to dock in Baily Head, habitat where there is a hundred thousand colony of Chistrap penguins. Deception is a crater sub-channel which opens to the sea, creating a natural port for the embarkation. Here we will find hot springs, an abandoned whaler station, thousands of pigeons, dominican seagulls, polar skuas and bifurcate tail chestnut and seagulls of the Antartica. We will watch petrel Wilson´s Storm nests and black belly Storm Petrels in the whaler station ruins in the Whalers´ Bay. For those persons who enjoy walking, it can be done by Baily Head to the top of the crater in Whalers´Bay to visit the remains of Hektor station, while our brave ships get into the crater through the espectacular Neptune´s Bellow in the circle of Deception Island.

In the afternoon, we can descend to Half Moon Island, where we can watch Weddell elephants and seals, as well as Chinstrap penguins, Blue eyes Shags, Wilson´s Storm petrels, Kelp seagulls, Snowy Sheatbills, antartic bifurcate tail seagulls and antartic chestnut skuas. In our way to the west, we will navigate to Cuverville Island, a small and rainy island, located between mountains of the Antartic Peninsula. There is a big colony of Gentoo penguins and breeding couples of chestnuts skuas. We expect the time and weather conditions are favorable so we can navigate beyond the south until Neko Port in Andyord Bay and Paradise Bay with the multicoloured icebergs and deep cut fjords, while we have the opportunity to watch big whales. We will have the chance to navigate in zodiac crossing between the icebergs and advance into the fjords. 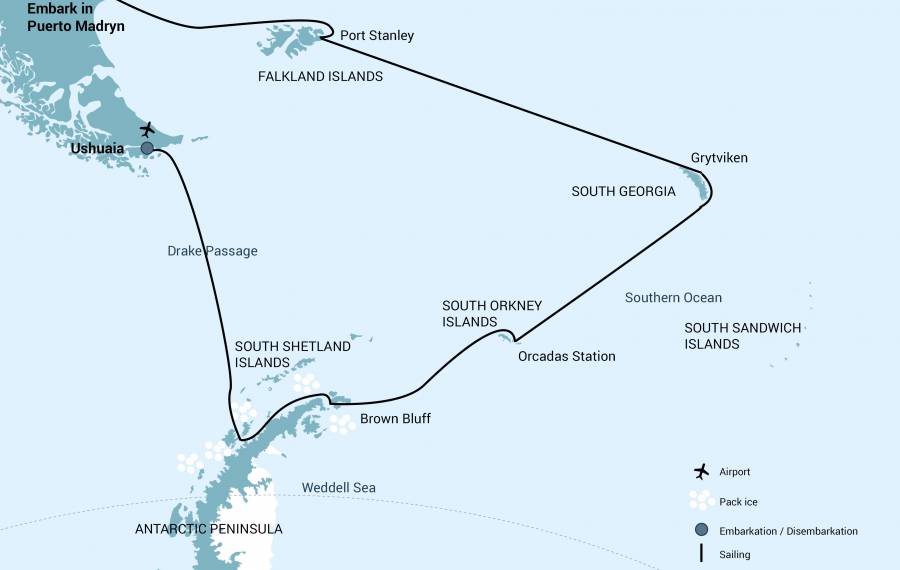