We travel to the White Continent to witness a special and unique event: The Solar Eclipse. It is a beautiful spectacle in which the Sun transforms and hides behind the new moon. Solar eclipses occur with a new moon, while lunar eclipses occur when there is a full moon. This event completes a magnificent journey to the Antarctic Peninsula, South Georgia Island and the Falkland Islands, in frontline ships such as the M/V Hondius or the brand new M/V Janssonius. 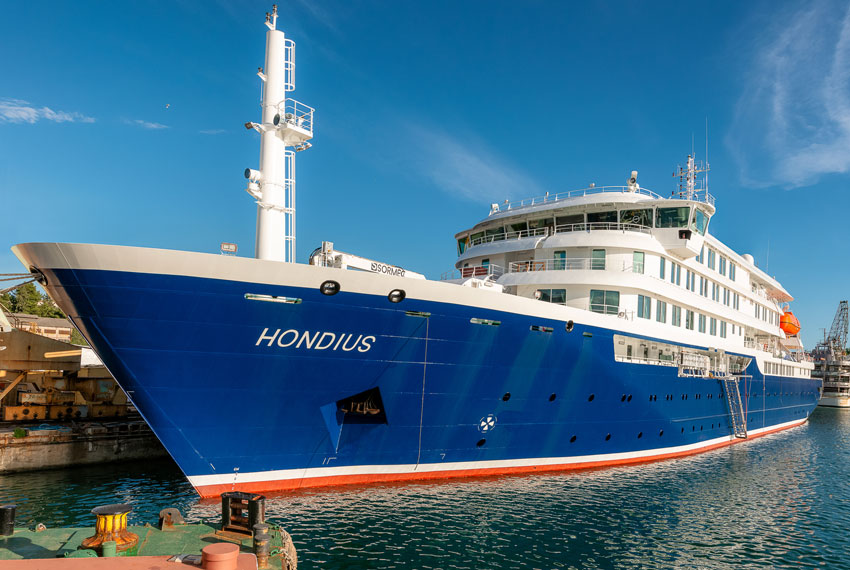 M/V Ushuaia is one of classic expedition trips to Antarctica, navigating the typical route to the Antarctic Peninsula and the South Shetland Islands. In these d... 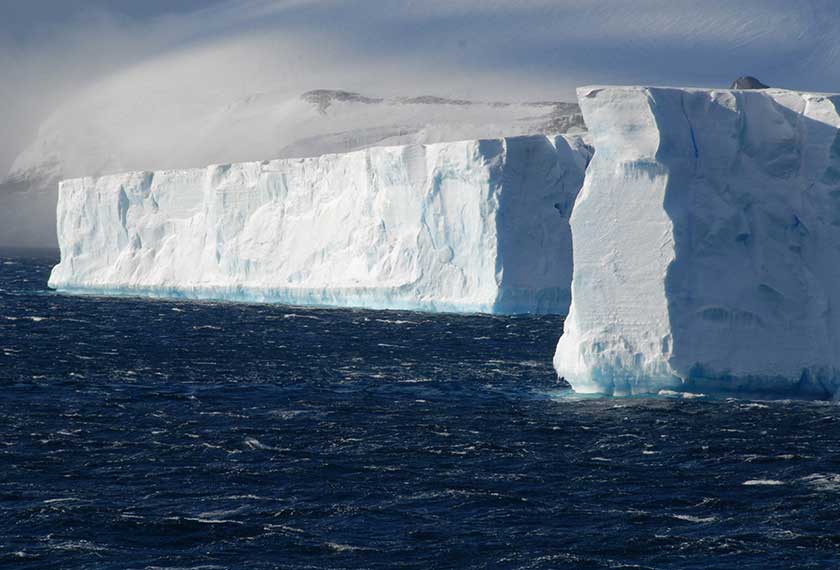 This cruise to Antarctica aims to reach the Weddell Sea, knowing the sub-Antarctic archipelago, as well as the Antarctic Peninsula and the South Shetland. Wedde... 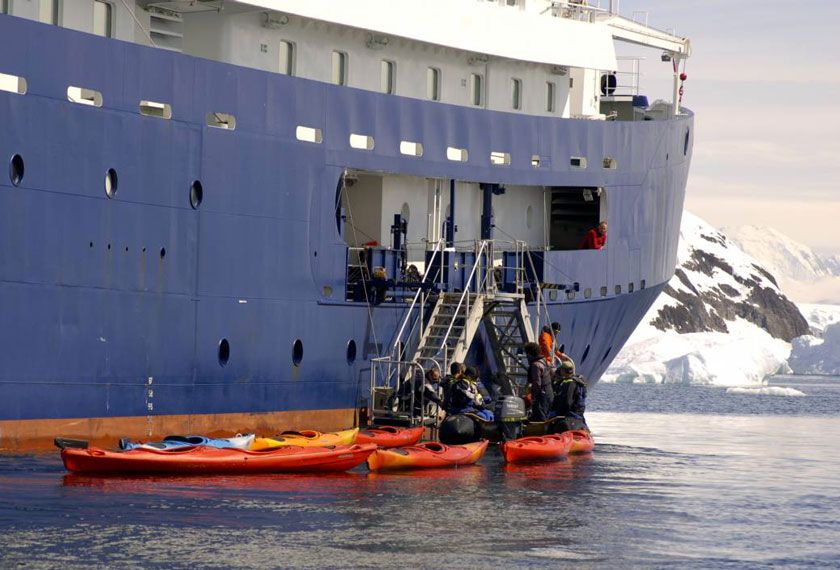 Adventure in Antarctica with the M/V Plancius/Ortelius

The traditional trip to the Antarctic Peninsula, but with a special bonus: adventure tourism activities fully included in the cruise, from kayaking, snowshoeing... 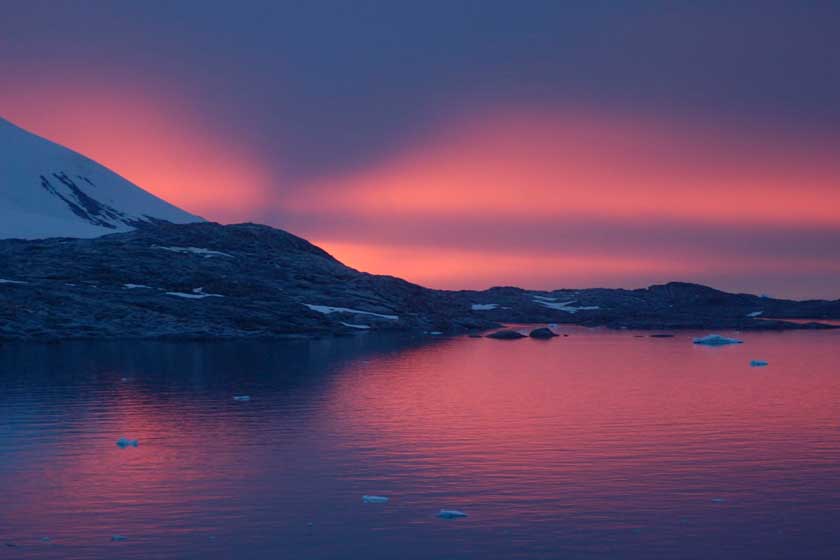 In the M/V Plancius, the classic tour of the Antarctic Peninsula called pioneering trip, traces an interesting route through the best sites. These trips add opt... 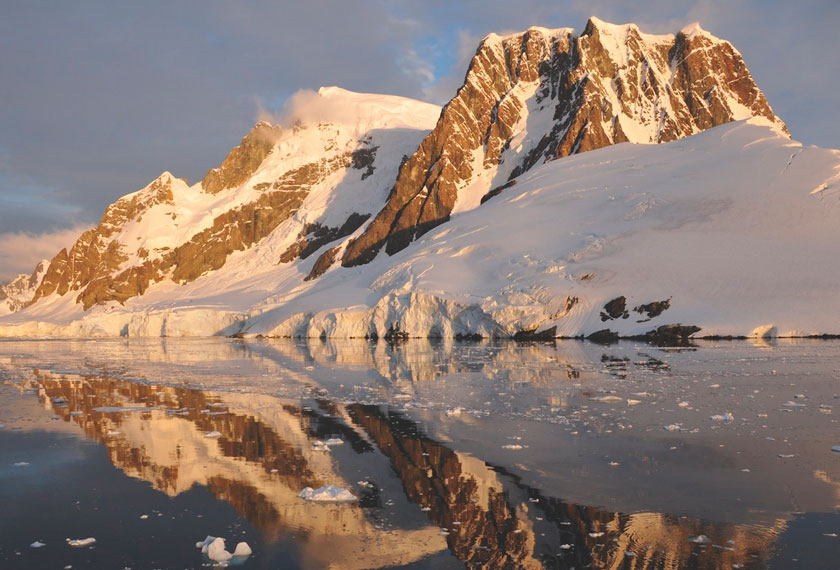 Day 1 - Departure from the port of Ushuaia

Boarding takes place in the afternoon, in the Port of Ushuaia, capital of Tierra del Fuego (Argentina), the southernmost city in the world, located on the banks of the Beagle Channel. The ship will slowly drift away from the shore, showing the picturesque bay and its urban panorama. Sailing runs smoothly through the night, sailing across the sea toward the Drake Passage.

Over the course of 2 days, the ship travels through the Drake Passage, the shortest and busiest sea route between the American continent and the Antarctic Peninsula. When the Antarctic convergence is reached, a natural barrier where the warm currents of the north mix with the cold waters coming from the south determining a wide biological diversity, numerous subantarctic species are appreciated.

In this area it is very likely to see the magnificent wandering albatross, the largest bird that flies over these seas and can measure up to 3.5m in wingspan; the gray-headed albatross, the light-mantled dark albatross and the black-browed albatross, the Cape pigeons and the wilson, blue and antarctic petrels in addition to the southern fulmar or silver petrel. Very close to the South Shetland Islands, the first icebergs are glimpsed to indicate arrival in Antarctica. Only in the afternoon of the third day you can see the South Shetland Islands, which are punished by the wind and are usually covered by the mist itself. We can observe a great variety of flora, such as mosses, lichens and flowering herbs.

This extended trip gives you the opportunity to further navigate the icy shoreline of the western Antarctic Peninsula. In the Gerlache Strait there are several opportunities for large landings where you can step on the Antarctic continent, surrounded by an epic landscape of alpine peaks and giant glaciers that are born at sea level. Gentoo penguins, leopard seals, Weddell seals, humpback whales, and minke whales are often seen here.

The volcanic islands of the South Shetlands are windswept and often shrouded in mist, but nonetheless offer many subtle pleasures. A wide variety of flora (mosses, lichens, flowering grasses) and fauna (gentoo penguins, chinstrap penguins, southern giant petrels) live here. On Deception Island, the ship plunges through Neptune's bellows and enters the flooded caldera. If you can land here, you'll find hot springs, an abandoned whaling station, and thousands of Cape Petrels. Here you can also see a series of seagulls, brown skuas, southern polar skuas and Antarctic terns.

If the ice allows it, we sail towards the Weddell Sea. Here colossal tabular icebergs announce their arrival on the east side of the Antarctic Peninsula. We can visit Brown Bluff, located in the ice-clogged Antarctic Sound, where we could have a chance to set foot on the continent. Paulet Island, with its large population of Adelie penguins, is another possible stop.

Giant icebergs and a good chance whale watching liven up this segment of the trip. Also, the best opportunity to spot antarctic petrels is here. Depending on the ice and weather conditions, the objective is to venture out onto the ice to find the best possible position to view the solar eclipse.

In the Weddell Sea we observed the total solar eclipse very early in the morning on December 4. The ship is positioned in the center of the moon's shadow and, if possible, at some distance on the drifting ice of the Scottish Sea. The edge of the ice will be approximately 60 ° S, 41 ° W.

Some coordinates for the path of the moon's shadow:

There may be sea ice on this route, and at the edge of the ice some southern polar skuas and snow petrels could join the other seabirds that drag the ship north.

We will arrive at the South Georgia Islands, where we must visit Elsehul Bay, with its active breeding of beach seals, and then continue to Right Whale Bay, Salisbury Plain, the Golden Harbor (Gold Harbor) and Cooper Bay will give you a great opportunity to see a large colony of Macaroni penguins, gray-headed albatrosses, dark albatrosses, antarctic pigeons and even the introduction of a non-native animal such as the reindeer in the Drygalski Fjord.

One of the places we plan to visit is Cooper Bay, chosen by wandering albatrosses to nest and raise their chicks. In Fortuna Bay we will try to carry out the steps that the mythical British explorer Ernest Shackleton will carry out and continue the journey to Stromness Bay. At this point and in Grytviken the ruins of the abandoned whalers' village, now inhabited by king penguins and seals that roam streets and buildings, still remain. The Grytviken Whaling History Museum and the adjoining Shackleton Tomb are other treasures from the past that we will visit.

Weather conditions will determine the areas that we can visit in South Georgia and where we can carry out activities. The destinations to visit can be:

We will navigate on the high seas again, in our way from South Georgia, we will cross the Antartic Convergence. We will enter into antartic waters, the temperature will descend 10º C approximately in a very few hours. Closer to the Convergence, we will see a great quantity of birds, next to the ship which will take part of the navigations, as if they were members of the ship, There will be many species, such as albatrosses, petrels, skuas, seagulls, among other bird species.

We will walk through the capital of the Falkland Islands, Port Stanley, we can experience the culture of the inhabitants of the Falklands, which has some south american characteristics as well as Victorian charm, such as the color of their houses or the neatness of their gardens or stylish bars English. In Stanley and the surrounding area, we can see a significant number of beached ships dating back a century. The village museum is small but has interesting things to see as the history of the first settlements.

Stanley, is located in the Soledad Island and continues being known for the British by its old name of Port Stanley and, for the Argentineans, like Puerto Argentino. It is currently the administrative center of the archipelago. They live around 2500 people (three quarters of the total population of the islands). Originally, Stanley was a small town, which since the nineteenth and early twentieth centuries, grew thanks to the importance it had in repairing the sailboats that sailed to Cape Horn.

On the third day we will arrive to the Falkland Islands with the purpose of dedicating all day on the west side of the archipelago, which offers an abundant wildlife, where not only observe different species of birds but also you can see southern dolphins. We visited 2 islands: Isla del Rosario and Isla Trinidad. We will hike along the shores of Carcass Island, where we will see Magellanic and Gentoo penguins, as well as having an encounter with birds and herons at night. On the Island of Saunders we can see Rockhopper Penguins, black-faced albatross and King cormorants. 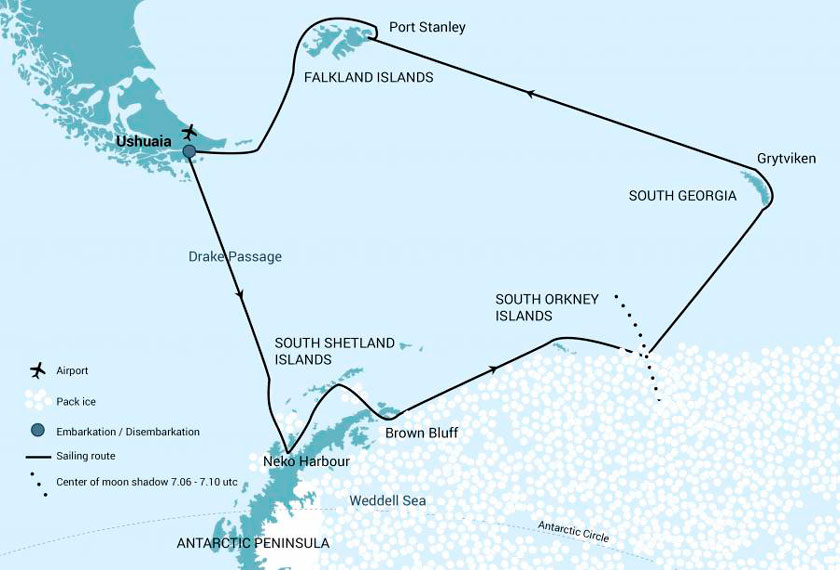