A tour of Buenos Aires that covers all from the classical to interesting excursions that takes us into its history. We discover the old Buenos Aires with its historical centre, from the Plaza de Mayo until the Plaza de Congress, the old zone that goes from the Manzana de las Luces until San Telmo and the Costanera Sur, renovated with the new exclusive barrio of Puerto Madero. We cannot leave out the Tango and the countryside with its Gauchos, moreover a visit to the Provincial Capital of La Plata or Luján, with its cathedral or the Jewish influence in Buenos Aires in the barrios of Almagro and Once. 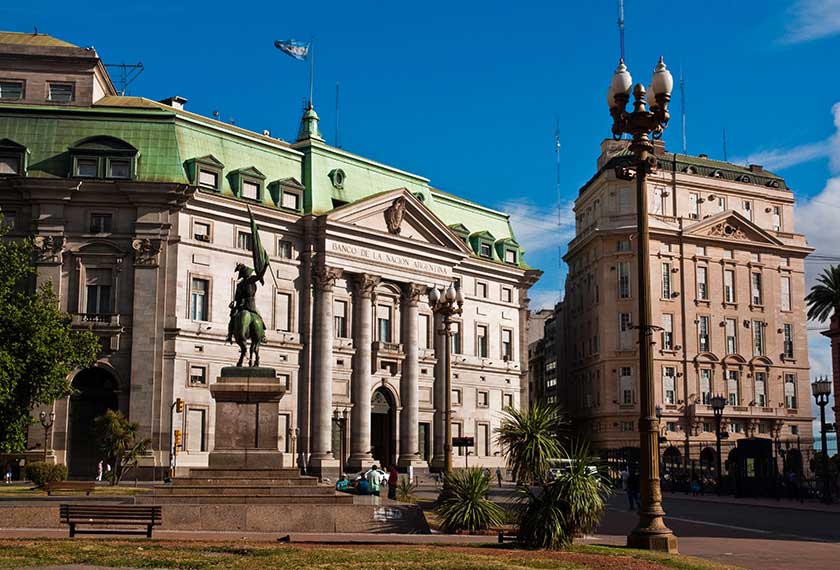 Reception in the International Airport of Ezeiza and transfer to the hotel.

Breakfast in the hotel. We start the walk in the barrio of Recoleta getting to know the Plaza Francia, the colonial church of la Basílica de Nuestra Señora del Pilar, the cemetery where Eva Peron was buried and the La Biela Café, one of the most popular cafes. After, we pass by Retiro with its important train stations and the English Tower and the impressive San Martin plaza where we can see the tomb of the fallen heroes of the Falkland Island war. From the plaza we take the pedestrian Calle Florida, the busiest shopping street, with its beautiful Galerías Pacífico mall, until Avenida Córdoba where we descend to Puerto Madero. The city side of Puerto Madero consists of renovated wharf buildings that have been converted into offices and exclusive restaurants that were part of the booming 90s. The other side, connected by bridges, including the La Mujer bridge which was designed by the talented Spanish architect Calatrava, is a very modern office and hotel development.

We walk a few blocks along the docks until we are nearly level to the Casa Rosada, the Presidential House, where we then divert back towards the City via the Plaza de Mayo with its surrounding buildings such as the colonial Cabildo and the Metropolitan Cathedral. If it is a Sunday we then go along streets cobbled in the Colonial days until San Thelmo and its cultural centre, La Plaza Dorrego, to visit its famous fair known especially for its antiques but also for its books and artisanal products. Apart from Sundays we walk from the Plaza de Mayo along the Avenida de Mayo with its art deco and art nouveau buildings until we take a well earned rest and an aperitif in the traditional and old Café Tortoni, a named city cultural site. The Café Tortoni, although with an Italian name, was in fact founded by a Frenchman in 1858. The Avenida de Mayo, at the beginning of the 20th century had very wide walkways and its trees gave it life and also protection from the sun. One of the special features of the avenue is the Palacio Barolo. We then return to the hotel to rest after a very active day. If you want to see other excursion options in Buenos Aires, click here: Tours in Buenos Aires.

Breakfast in the hotel. In the North Dock in Puerto Madero, in the centre of Buenos Aires, we board a modern launch with state of the art nautical technology, great comfort and available refreshments, in order to make a cruise along the coast of the Río de la Plata and into the Delta del Tigre. We are accompanied by the excellent views of Buenos Aires from the water and pass by the Jorge Newberry Airport, the football stadium home of River Plate, known as the Monument, and the City University. We then cruise by the exclusive residential barrios of Vicente López, Martinez and the elevations of San Isidro, the port of Olivos and various nautical clubs until we enter the Delta of the río Paraná, a fast flowing river that has its source in Brazil.

Especially at weekends and on sunny days there will be a lot of marine activity with an abundance of yachts and cruisers as well as the water taxis that service the houses and restaurants that on the islands in the Tigre Delta. The Delta is like a rural Venice with its houses on the banks and its streets being the waterways. We go to the El Alcázar recreation centre on the Banks of the río Sarmiento and then continue our trip past a number of the islands until we stop close to midday at the bustling water transport station of Tigre, where we can go and have lunch. After lunch we return to Puerto Madero.

Breakfast at the Hotel. We will go shopping towards the most important malls of Buenos Aires in the exclusive district Recoleta. Buenos Aires Design, Patio Bullrich and Galerías Pacífico in Cordova Av. and the pedestrian Florida St.

During the morning we'll go though Buenos Aires Design or Patio Bullrich. Then we'll make a stop for having lunch at Puerto Madero. In the afternoon we'll be transferred to Galerías Pacífico Mall situated in Florida St.

We take a program dedicated to the understanding of the Tango and its slum origins. We begin in the old immigrant suburbs of Buenos Aires, La Boca, by visiting a classic tenement house where the Tango started and converted into popular dance and urban music. The tenement blocks were old rectangular houses which were overcrowded with immigrants of different nationalities that had one thing in common: being poor. We follow this by a visit back to the City, to the Avenida Corrientes, the Broadway of Buenos Aires, where many of the theatre works are related to Tango, and to the Palais de Grace where the aristocracy started in the Tango. These were the ones who introduced the dance into Europe. We finish in the zone of Abasto in the house lived in by the famous Tango singer, Carlos Gardel.

Breakfast in the hotel. On this day there are three choices: to visit the city of Luján or La Plata or a walk by the barrios most associated with the Jewish community of Buenos Aires and also the most important related places. Luján and La Plata are similar distances, less than 100kms, from the centre of Buenos Aires, the first to the West and the other to the South and both are reached by fast highways. Luján is an important patrimonial cultural site. In the historic city centre we visit the colonial style Enrique Udaondo museum of ethnology, the car museum, the markets of the Avenida Nuestra Señora de Luján and finally the impressive Gothic styled Cathedral, la Basílica de Nuestra Señora de Luján, where a great number of believers give testimony to their faith. Here you can have an optional excellent Argentinean barbecue lunch.

La Plata is the capital of the Province of Buenos Aires and is well known for its street design with its numbered streets and especially its diagonals. Highlights of the city include its museums and its diverse architecture. On our visit we will see the Cathedral, the Natural Sciences Museum, the Governor's House, the Casa Curutchet which was designed by Le Corbusier and is situated in the Avenues 1 and 53, and finally the Paseo del Bosque, where you can see different types of trees such as eucalyptus, oaks and ginkos and the artificial lakes.

In the Jewish Buenos Aires we go to visit the places renowned by the Jewish society, fundamental in the construction of the eclectic personality of the city. We go to the Israel Embassy, la AMIA, the la Shóa museum and the Hebrew Argentine Society where shine the murals of Batle Planas and Castagnino. We finish with a walk in the traditional barrios of Abasto, Villa Crespo and Once.

Note: It is possible to opt for one of the three visits or spend a day in the Buenos Aires countryside.

Breakfast in the Hotel. Transfer to the international airport of Ezeiza. End of our services.