The tour incorporates the classic itinerary of this cosmopolitan city. Buenos Aires, on the banks of the River Plate, exhibits in its historic centre the contrast of a great city. It reflects its affluent past in its buildings of different styles especially the Spanish and French influences from colonial Spanish to art-decó etc. This together with its religious buildings, classical cafes and recycled and modern edifices produces an interesting combination. Amongst others, the more important places are the Plaza de Mayo and the barrios (districts) of La Boca, Recoleta and Puerto Madero. 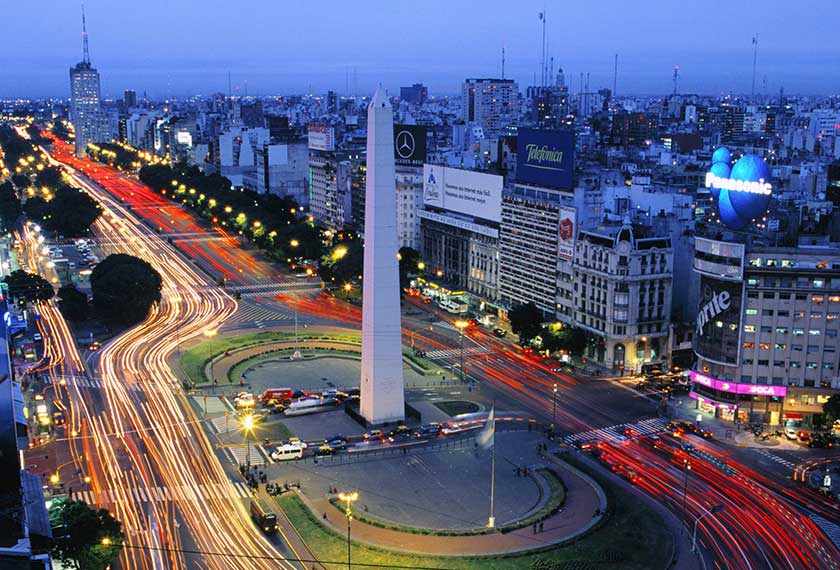 Reception in the International Airport of Ezeiza and transfer to the hotel.

Day 2 - Private tour of the city of Buenos Aires

Breakfast in the hotel. Like many cities, Buenos Aires is split into areas (barrios) that commonly have distinctive features. We begin our tour visiting some of the most classic of these barrios where we will discover some splendid architecture that ranges from the old colonial structures such as the Cabildo, the ostentatious French style palaces and buildings mostly related to the very prosperous early twentieth century, art deco and the modern skyscrapers of the business micro centre and Puerto Madero, the renovated dock area. We go to some of its principal noteworthy sites such as the spectacular, recently renovated, Colón Opera Theatre, the most recognized monument, the Obelisk, the Plaza de Mayo, known especially for its silent protests against the military government and its surrounding buildings such as the Cabildo, the foundation of Buenos Aires, the Metropolitan Cathedral where lies the mausoleum of Don José de San Martin, the 'father' of the Republic, and, of course, the Presidential House, the Casa Rosada.

We discover barrios such as San Telmo, the Antique centre, which was inhabited by the first aristocracy until there was a general movement to Barrio Norte (Recoleta) due to the yellow fever outbreak at the end of the nineteenth century. We visit La Boca, the home of the famous football team, and one of the most picturesque barrios due to its colourful houses and its working class Italian immigrant influences. It is also known for its tango and art and here we take a walk down the artisans' passage and to its gallery as well as a walk to the Port. This is followed by a visit to Puerto Madero, the renovated dockland site, with the new part with its excellent offices and apartments securely separated from the city by bridges. Going further north we reach the very popular parks of Palermo known for their traditional monuments such as the Planetarium, Galileo Galilei and the Magna Carta.

We also visit the elite residential barrio of the City, Recoleta, where we also find the Museum of Fine Arts, the picturesque colonial church of Nuestra Señora del Pilar and the famous cemetery where Eva Peron was buried. These are situated close to the Plaza Francia where every Sunday there are popular artisanal stalls and people take advantage of sunny days relaxing in the beautiful plazas with their incredible trees. In Palermo Chico, a very exclusive residential zone, we can see luxury French style palaces and enjoy the parks designed by the French landscaper, Thays, that have a style different to the rest.

This is a very popular excursion. We take a trip to a large country estancia of more than 2,000 acres that is dedicated principally to agriculture but has become an excellent tourist site showing some of the renown Argentinean country culture. We are received in the general store with empanadas and red wine and then can visit the estancia museum and chapel. At lunch we are treated to a country barbecue. We also have the opportunity to see a Tango Show and gaucho folklore and dance. Amongst the other activities offered are rides in horse and carts observing the landscapes, their crops and the unequalled charm of the wild and rustic. We finish the day with a spectacular exhibition of typical gaucho horsemanship with a troop of horses.

Breakfast in the hotel. In the North Dock in Puerto Madero, in the centre of Buenos Aires, we board a modern launch with state of the art nautical technology, great comfort and available refreshments, in order to make a cruise along the coast of the Río de la Plata and into the Delta del Tigre. We are accompanied by the excellent views of Buenos Aires from the water and pass by the Jorge Newberry Airport, the football stadium home of River Plate, known as the Monument, and the City University. We then cruise by the exclusive residential barrios of Vicente López, Martinez and the elevations of San Isidro, the port of Olivos and various nautical clubs until we enter the Delta of the río Paraná, a fast flowing river that has its source in Brazil.

Especially at weekends and on sunny days there will be a lot of marine activity with an abundance of yachts and cruisers as well as the water taxis that service the houses and restaurants that on the islands in the Tigre Delta. The Delta is like a rural Venice with its houses on the banks and its streets being the waterways. We go to the El Alcázar recreation centre on the Banks of the río Sarmiento and then continue our trip past a number of the islands until we stop close to midday at the bustling water transport station of Tigre, where we can go and have lunch. After lunch we return to Puerto Madero.

Day 5 - Breakfast in the Hotel.

Transfer to the International Airport of Ezeiza. End of our services.